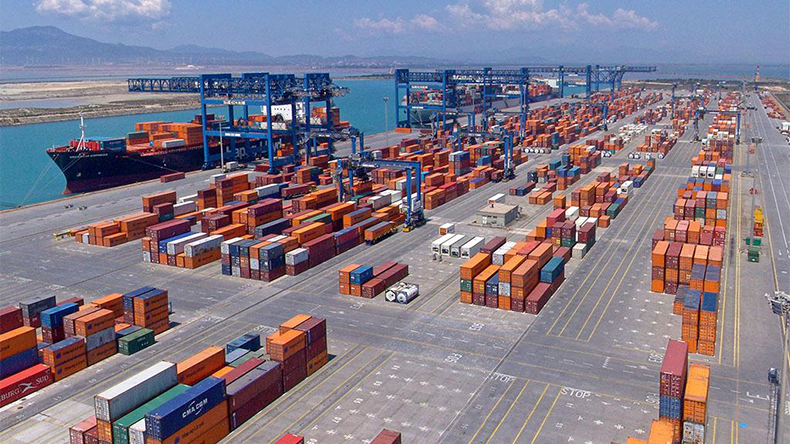 Logistics innovator CargoBeamer group and Calais Promotion are to receive a grant from the European Union (EU) of up to just over €7 million for the construction of a new rail-road terminal near Calais that uses an innovative system for the automated transfer of freight trailers to and from rail wagons.

The EU said this multimodal terminal was “a key step in the beneficiaries’ plans to extend services on key freight routes and to strengthen the logistic functions of the hub of Calais by allowing freight trailers that normally cannot be moved by crane to be transferred from lorries onto trains, and vice-versa”.

CargoBeamer is a logistics company that has developed an innovative system for the automated transfer of freight trailers to and from rail carriages, thereby allowing for smoother operations in multi-modal terminals and offering new opportunities in transhipment markets.

The EU said the “innovative technology rolled out in this action will support the modal shift from road to rail and will improve the environmental performance of the transport sector, reduce congestion in and around Calais itself and improve the efficiency and safety of transport. Furthermore, the creation of the new rail-road combined transport terminal, expected to be delivered by 2022, will improve freight traffic flows beyond the city itself and into France, the UK and the rest of Europe.”

The grant is provided by the Connecting Europe Facility (CEF) programme, a funding instrument for developing the Trans-European Transport Network (TEN-T) with a budget of €24 billion over the period 2014-2020. The project was selected under the 2018 call for proposals, which particularly prioritized investments into combined transport infrastructure, underlining the European Union’s ambition to shift road freight to more sustainable modes of transport.

Jürgen Weidemann, CEO of CargoBeamer, said: “Our system provides an efficient solution to address the problems related the movement of goods between member states: reducing bottlenecks on the highways, improving intermodal connections, strengthening the corridors and mitigate the environmental impact.

“I am very pleased with the award of the CEF grant. It is the highest form of recognition regarding the relevance and usefulness of our technology for the implementation of the European policies promoting combined transport and rail freight services.

The funding provided by the EU covers around 20% of the total investment costs of the project, which amounts to €32 million, CargoBeamer said, adding: “The award of the grant represents a crucial step towards establishing CargoBeamer’s ‘rail motorway’ hub in Calais.

“The terminal project contributes to the implementation of the regional and local strategy for multimodality and is strongly backed with additional political and financial support by the city of Calais, the region Hauts de France and the French State.”

Natacha Bouchart, President of Calais Promotion, commented: “Our region absorbs more than half of the flow of goods between the United Kingdom and continental Europe. In 2018, 3.6 million freight vehicles transited through the Channel tunnel and the port.

“The establishment of the new ‘rail motorway’ will contribute to the diversification of the region’s logistics activities and strengthen its position as the major node for cross-Channel traffic. Furthermore, freight transport will increase in the coming year, which is why it is important to develop the rail freight sector. The CargoBeamer project will offer an environmentally friendly and competitive alternative to road transport.”

The CargoBeamer project will be implemented at the heart of the ‘ZAC Transmarck-Turquerie’, an area of 220 hectares dedicated to transport and logistics activities. Due to its strategic location, this area represents a key element of Calais’ regional development strategy.

It is located at the intersection of the main European highways, as well as near the port and the Channel tunnel, which makes it ideal for attracting UK traffic and creating added value in the area, the project partners said, adding: “In the coming years, Transmarck-Turquerie is likely to become one of the major logistics hubs in northern France, contributing to strengthening Calais’ position as an essential European transport node.”

CargoBeamer added: “Whereas the road remains the predominant mode of transport for goods, the development of rail freight is still relatively limited. This is why innovative solutions are needed to allow for shifting freight towards more sustainable modes of transport.

“The CargoBeamer technology provides the opportunity to establish efficient and competitive combined transport services, which are more environmentally friendly compared to road transport.”

CargoBeamer said its automated transhipment technology can handle all standard semi-trailers, including non-craneable ones, adding: “Those semi-trailers, which were previously excluded from combined transport services, can now be transported by rail. The horizontal transhipment process is fully automated, electrified, very fast and therefore emits only very low levels of noise.

“Thanks to automation and parallelization, a whole train can be unloaded and reloaded in 20 minutes.”

The 5.7 hectare terminal platform in Calais will be equipped with 18 automated transhipment modules and 150 parking spaces for semi-trailers. The property was acquired in June 2018, while the building permits were granted in April 2019.

The implementation of this innovative combined transport terminal will allow for Calais to be better connected to important logistics and industrial centres in Europe, CargoBeamer said.

The EU noted that the Port of Calais channels roughly half of all trade between mainland Europe and the UK, with traffic expected to double by 2021 compared to 2019 values.