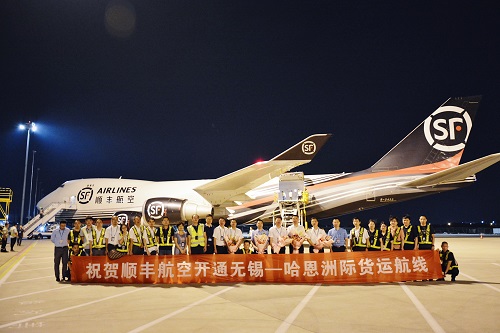 China’s SF Airlines has launched its first intercontinental route with the arrival of a Boeing B747-400ERF at Germany’s Frankfurt-Hahn airport from Wuxi in southern Jiangsu province, eastern China.

The freighter made a stopover at Chongqing in southwest China and will maintain a Wuxi-Chongqing-Frankfurt Hahn-Wuxi rotation for the airline arm of SF Express, an e-commerce service delivery company.

The 12-year-old B747 freighter, once belonging to failed German-Chinese carrier Jade Cargo, was one of two B747-400ERFs purchased by the SF Airlines’ parent group in November 2017 before undergoing extensive maintenance work.

The aircraft was then put into operation on domestic routes, and since May this year has flown on SF Airlines’ longest international route, between Shenzhen and Chennai.

SF Airlines stated in late August that it had established a “dedicated guarantee standards and talent team for the 747 aircraft model, laying a good foundation for the second 747 all-cargo aircraft that is put into operation subsequently.”

The all-cargo operator stated on its website that the Hahn flight “has been the longest one operated by SF Airlines so far” at 9,540km.

It added: “With a maximum payload of 110 tonnes to accommodate cargo loaded in Wuxi, Chongqing and Hahn, the flight is able to consolidate and ship cargo between East China, West China and Hahn – a critical air freight distribution hub of Europe – through air-air and air-land transit under huge support from local customs in Wuxi and Chongqing.

“Highly valued by local customs in Wuxi and Chongqing and through efforts in communication and coordination, the flight features a simplified flight approval procedure, an optimized transit regulation process and a highly efficient, orderly customs clearance service.

“It also promotes cross-border trading and value realization through cargo circulation and facilitates implementation of the ‘Belt and Road’ Initiative in business trading and circulation.”

The statement said that “after the operation is normalized,” the new route will transport more than 600 tonnes of shipments for SF’s international business from the Chinese Mainland to Europe.

SF Airlines has the largest freight fleet in China, with 57 all-cargo aircraft in service, flying to more than 60 cities and regions at home and abroad.