ONE APUS Container Ship Accident Update:Damaged Containers maybe Up to 2,250

ONE accident update: Up to 2,250 containers may have been lost or damaged, with the under-deck containers continuing to be delivered to their destination by the ship.

The container ship ONE APUS is still safely moored in The Port of Kobe after being hit by bad weather on 30 November 2020. An estimated 1,816 containers were damaged and lost before. 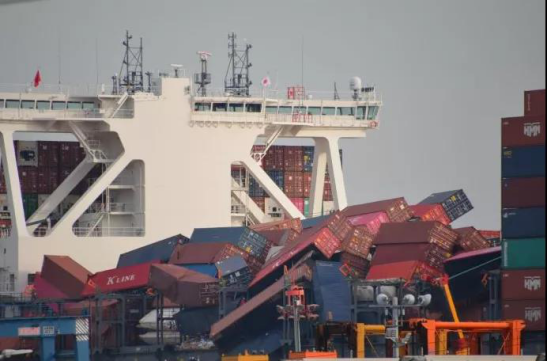 Prepare to unload on the chaotic deck

On the evening of December 23, the official website of Ocean Network ONE released the latest update news: up to December 22, 50 containers have been discharged safely;Unloading of the remaining containers has been proceeding steadily.It is expected to take some time to complete the unloading.

Meanwhile, inspections and inspections of containers are being carried out to assess the status of the cargo. 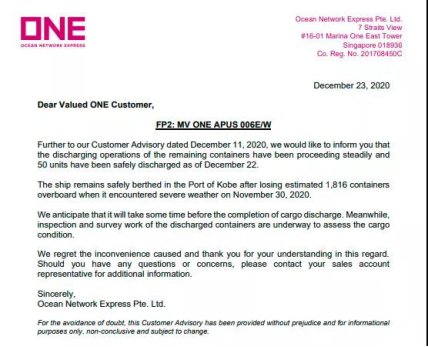 The move follows a ONE11 announcement late On Tuesday that it is expected to take at least a month or more to carefully dismantle the cleanup and unload the ship's containers, according to a timetable laid out by stowage planners.

But according to WK Webster, an insurance claims company, it is estimated that as many as 2,250 containers may have been lost or damaged because of the bad weather.

General average had not yet been declared at press time, and industry insiders expect it to be in the near future.

The exact cause of ONE's accident is unknown, but according to weather experts tracking the path of ONE Apus on that day, the storm cell it hit may have been a wave as high as 16 meters, or about the height of a five-story residential building.